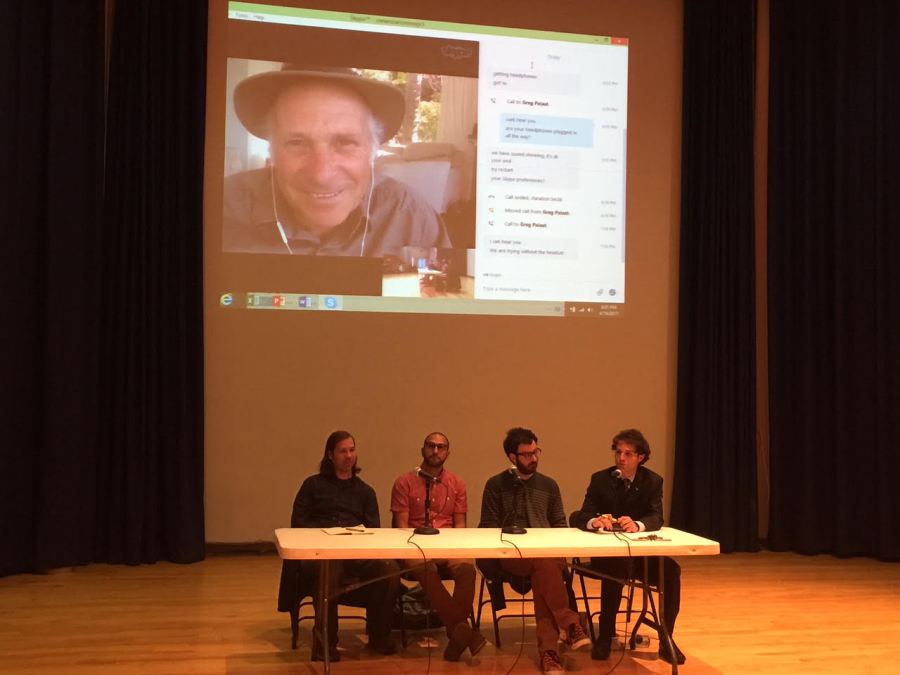 The diverse and informed panel explored a range of media problems and their causes.

Mr. Palast joined the panel via Skype from Los Angeles. We are deeply grateful to all of the participants.

The Constitution regards freedom of the press as vital to democracy. The framers of the Constitution provided substantial subsidies to the press (via cheap postal rates) without regard to political viewpoint, allowing a wide variety of publications to flourish.

In the 1934 Communications Act, FDR granted big media companies free use of the public airwaves in exchange for a) producing comprehensive news programs, b) requiring equal time to both sides of issues, and c) giving candidates free air time. But since then, media corporations have chipped away at their legal responsibilities to inform the public, by eliminating the Fairness Doctrine (1987) and allowing consolidation of media outlets (1996). Today, we find that most news coverage is in the hands of six very large corporations that emphasize profits, and who relegate production of quality news reporting as too expensive and secondary to their interests.

Devotion to the bottom line has resulted in: a) shallow news coverage, b) editorial judgment that’s increasingly constrained by the views of corporate owners, and c) important stories being ignored or unreported. For instance, among those mentioned at the forum were:

A more subtle problem is the introduction of stories as news which are really intended to promote the viewpoints of advertisers or corporate owners. The public is often unaware that many stories have essentially originated in PR departments.

The Internet offers many news sites that are not controlled by the big six corporations. These can be useful as alternatives to the mainstream news programs and newspapers.

Beginning in March 2017, a series of documentary films exploring problems of the media was shown at the Unitarian Universalist Congregation of Central Nassau, 223 Stewart Ave, Garden City, NY 11530.

Jan Senko shows how her dad changed, politically and personally,  as he listened to radio broadcasts on his commute to work.  A trailer is available on YouTube: Brainwashing of My Dad Trailer

Sue Wilson examines the influence of corporations on lawmakers as they make media policy often contrary to the public interest. The trailer is available at her website: Broadcast Blues

Project Censored is a media literacy group devoted to educating the public about the importance of a free press. Each year they publish a report about the most important under-reported stories. Website: Project Censored

The film, Project Censored The Movie: Ending the Reign of Junk Food News, tells what is wrong with the media and about their own work in bringing important stories to light.

After the June 9th showing, filmmaker Christopher Oscar joined us at this meeting by Skype for Q&A. Chris gave us many insights into why he made the film, and about the vital stories that don’t make the evening news.

With Q&A by filmmaker and media expert, professor Jeff Cohen.

After viewing this penetrating and information-packed film, the audience was able to speak with Jeff Cohen in person during live (and very lively!) Q&A.

Prof. Cohen was also interviewed privately by Janine Melillo of LIMTF. He gave advice for how the Task Force can be more effective in bringing its message to the public.

Here are some brief notes from the interview.

Opening question about how hard it is to get an environmental story produced on ABC News – Victor Neufield, head of news division – his wife is a spokesperson for the nuclear power industry. Spousal relationships need to be “correct”, e.g. wouldn’t be acceptable if spouse worked for Greenpeace.

Refers to 2013 book: This Town (Washington DC) by Mark Leibovich about the power culture.

J: We are seen as a satellite to NYC; we don’t get L.I.-centered news

So many places are lacking local news like this; it’s very common. Cannot have local democracy w/o local media. In 1831 Alexis de Tocqueville was impressed to note that Americans were reading newspapers of all sorts. But now half a dozen corporations control everything. Democracy needs many viewpoints, accountability of officials. The US falls flat in both departments. Independent media is rising, but mainstream media is crashing because advertisers no longer need newspaper ads. Says there’s an independent local online newspaper. L.I. Business news? Or theislandnow.com?

J: How do we get the most effectiveness from our efforts?

You’re doing great stuff. That’s important. Do what you can. Key thing: affiliate with journalism departments, students, to encourage more local news. Approach professors about collaboration about news. Local county and municipal governments need to be reported on.

Spread the word that there are alternatives to mainstream media. Let people know about alternatives: Democracy Now (Amy Goodman); Common dreams; truthdig. Jeff recalls underground newspapers in the good old days, e.g. Ramparts, but now there are many more independent journalists and online news outlets. This is a good time for independent media. Trump trying to end net neutrality; the corporations will be able to discriminate. Ajit Pai (Verizon attorney who now heads the FCC) wants to end neutrality. This is a freedom of the press issue, the biggest battle we face just now. Use militant non-violent demonstrations.

J: What about the ‘Net Neutrality July 12 Day of Action’?

Great. Talk it up. Freepress.net, the organizer of the Day of Action, was founded by R. McChesney (also author of “The Problem of the Media”)

J: How do you start telling people about media literacy?

Must start in the high-schools. Get young people involved: commercials, TV programs, then news. Failure of education. School boards are open to it. Jean Kilbourne’s “Killing Us Softly” documentary; discusses women in ads, gender stereotyping.

J: Then you start questioning other things.

Some other organizations in the forefront of supporting net neutrality are:

Click on the Freepress Blog tab for some of the latest developments.

On January 16, 2018, Freepress filed suit against the FCC to win back net Neutrality.

On August 20, Mozilla joined the fight with its own filing against the FCC.

The FCC may indeed be vulnerable on legal grounds (see Tim Wu’s opinion article below.)

Tim Wu, of Columbia University law school, first coined the term “net neutrality.” Here is his recent opinion article in the New York Times, which looks ahead to action in the courts:

Courts Will Have to Save Net Neutrality

Susan Crawford is a professor of law at Harvard. Here is her recent opinion article in Wired magazine, which examines Chairman Pai’s strategy:

Would you like to tell Newsday about a story? There are several ways to contact them or send them documents while protecting your identity. The link is below:

5 Ways to Send Tips to Newsday